Never considered myself much of a peeping-tom, but lets face it sometimes you just can’t deny that insatiable curiosity unless you just go ahead and look. The hardest time for me to not look into the lives of those around me is when it’s evening time and I’m out walking the neighborhood. You see the glowing light cast on the pavement, see a form cross the light’s path, and wonder “Huh, wonder what/who caused that?” Your head turns almost on its own accord and before you know you’re watching someone set the table for dinner or changing the channel on the TV.

Tonight, I was walking upstairs to my room and had one such peeping-tom experience. To the limited few who have seen my new home in New England, I was on our second floor heading to our third but it’s not an all important detail for those of you who haven’t. We do not have curtains- none of us here like them in the first place. This detail gives us unhampered natural lighting, but also allows for unhampered viewing in both directions (inside and outside).

I was walking to the next staircase and happen to see light from across the way to the next door neighbors. There I spied chaotic movement. Naturally, I stopped and thought “What in the world???” Care to take a stab at what I saw?

Hooked I see. 🙂 Don’t worry, we all have that curiosity. 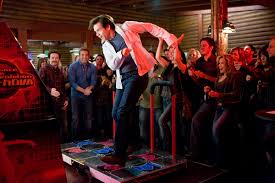 Anyway to continue, one of the the neighbors is repeatedly jumping up and down. My suspicion is that this woman is playing one of those Dance Revolution Games where you have a pad of the floor and have to jump on the proper square in order to score points. Watching the neighbor was entertaining as hell for a little while because I couldn’t actually see what she was doing other than jump-jump-jumping. And she was pretty involved in her jump-jump-jumping. The picture is of Jim Carey in Yes Man playing one such game.

I’m guilty of having one of these games for my Wii. It’s dangerous when I play because I’m not very coordinated. I’m sure that doesn’t come to much of a surprise to many of you. Graceful one thing “I ain’t!”

P.S. She’s still at it an hour later.

Posted in A Daily Dose